The following skiplinks will help you navigate to each major section of this page. This is additional to the accesskeys that can be used to navigate the site. Read more about Accessibility features on this site. 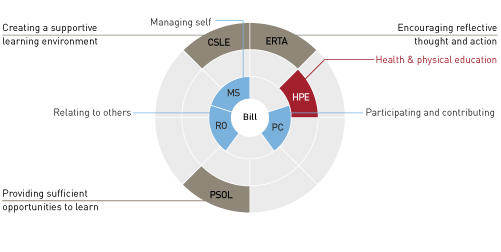 Show links to the curriculum

Bill attends a special school and is in a class with eight other students with special education needs. This class of nine has a teacher and two full-time teaching assistants.

Bill is on the autism spectrum. Over time, he had developed a range of friendships with his male peers. These story strings are about the way Bill has developed a broader range of relationships and relationship skills. The stories demonstrate Bill’s willingness to form and value new relationships, and ways he has assumed a more responsible and positive social role.

Although Bill is academically able, and his excellent creative writing is an instance of this, he does not see the point of certain social graces. For example, Bill often forgets things, such as greeting before he starts to discuss the adventures he has been having since he last saw you.

Bill has also been reluctant to express positive emotions or say pleasant things about the people in his life. In the past, Bill has chosen to play the role of “the villain”. The villain is an anti-social model who revels in his negative attitudes towards others. Bill has not always been comfortable with social situations and he found that assuming this role could justify anti-social behaviour. This year, we have witnessed a breakthrough in Bill’s attitudes towards others. He has become far more positive in his social interactions and in the expression of his feelings and emotions.